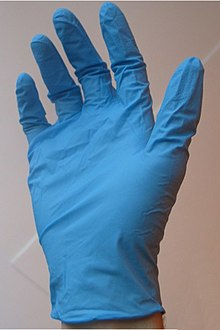 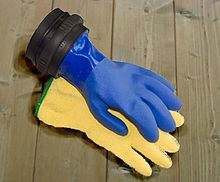 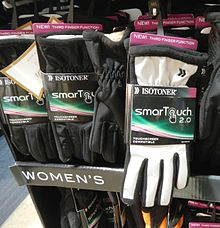 Western lady's gloves for formal and semi-formal wear come in three lengths: wrist ("matinee"), elbow, and opera or full-length (over the elbow, reaching to the biceps). Satin and stretch satin are popular and mass-produced. Some women wear gloves as part of "dressy" outfits, such as for church and weddings. Long white gloves are common accessories for teenage girls attending formal events such as prom, quinceañera, cotillion, or formal ceremonies at church, such as confirmation.

Fingerless gloves or "glovelettes" are garments worn on the hands which resemble regular gloves in most ways, except that the finger columns are half-length and opened, allowing the top-half of the wearer's fingers to be shown.

Fingerless gloves are often padded in the palm area, to provide protection to the hand, and the exposed fingers do not interfere with sensation or gripping. In contrast to traditional full gloves, often worn for warmth, fingerless gloves will often have a ventilated back to allow the hands to cool; this is commonly seen in weightlifting gloves.

Fingerless gloves are worn by bicyclists and motorcyclists to better grip the handlebars, as well as by skateboarders and rollerbladers, to protect the palms of the hands and add grip in the event of a fall. Some anglers, particularly fly fishermen, favour fingerless gloves to allow manipulation of line and tackle in cooler conditions. Fingerless gloves are common among marching band members, particularly those who play the clarinet or open-hole flute, due to the difficulty of covering small holes whilst wearing gloves. The lack of fabric on the fingertips allows for better use of touchscreens, as on smartphones and tablet computers. Professional MMA fighters are required to wear fingerless gloves in fights.

A leather glove is a fitted covering for the hand with a separate sheath for each finger and the thumb. This covering is composed of the tanned hide of an animal (with the hair removed), though in recent years it is more common for the leather to be synthetic.

Leather gloves have been worn by people for thousands of years. The unique properties of leather allow for both a comfortable fit and useful grip for the wearer. The grain present on the leather and the pores present in the leather gives the gloves the unique ability to assist the wearer as they grip an object. As soft as a leather glove may be, its pores and grain provide a level of friction when "gripped" against an item or surface.

A common use for leather gloves is sporting events. In baseball, a baseball glove is an oversized leather glove with a web used for fielding the ball. Leather gloves are also used in handball, cycling, and American football.

Early Formula One racing drivers used steering wheels taken directly from road cars. They were normally made from wood, necessitating the use of driving gloves.[19]

Leather is a natural product with special characteristics that make it comfortable to wear, and give it great strength and flexibility. Because it is a natural product, with its own unique variations, every piece has its own individual characteristics. As they are worn and used, leather gloves (especially if they fit snugly) will conform to the wearer's hand. As this occurs the leather of the glove will become more malleable, and thus softer and more supple. This process is known as 'breaking-in' the glove. Overtime wear spots may appear on certain parts of the palm and fingertips, due to the constant use of those areas of the glove. Creases and wrinkles will appear on the palm side of the leather glove and will generally correspond to the locations of the hinge joints of the wearer's hands, including the interphalangeal articulations of hand, metacarpophalangeal joints, intercarpal articulations, and wrists.

Because the leather is natural as well as delicate, the wearer must take precaution as to not damage them. The constant handling of damp or wet surfaces will discolor lighter-colored gloves and stiffen the leather of any glove. The wearer will often unknowingly damage or stain their gloves while doing such tasks as twisting a wet door knob or wiping a running nose with a gloved hand.[29]

The component parts that may be found in a leather dress glove are one pair of tranks, one pair of thumbs, four whole fourchettes, four half fourchettes, two gussets, and six quirks. Depending on the style of the glove there may also be roller pieces, straps, rollers, eyelets, studs, sockets and domes. Finally, linings will themselves consist of tranks, thumbs and fourchettes.

The most popular types of leather glove sewing stitches used today are:

Driving gloves are designed for holding a steering wheel and transmitting the feeling of the road to the driver. They provide a good feel and protect the hands. They are designed to be worn tight and to not interfere with hand movements. The increased grip allows for more control and increased safety at speed.[31]

True driver's gloves offer tactile advantages to drivers frequently handling a car near the limits of adhesion. Made of soft leather, drivers gloves are unlined with external seams. 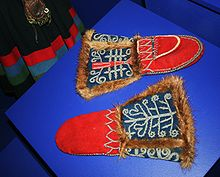 Gloves which cover the entire hand but do not have separate finger openings or sheaths are called mittens. Generally, mittens still separate the thumb from the other four fingers. They have different colours and designs. Mittens have a higher thermal efficiency than gloves as they have a smaller surface area exposed to the cold.[32]

The earliest mittens known to archeologists date to around 1000 A.D.[33] in Latvia. Mittens continue to be part of Latvian national costume today.[34] Wool biodegrades quickly, so it is likely that earlier mittens, possibly in other countries, may have existed but were not preserved. An exception is the specimen found during the excavations of the Early Medieval trading town of Dorestad in the Netherlands. In the harbour area a mitten of wool was discovered dating from the 8th or early 9th century.[35]

Many people around the Arctic Circle have used mittens, including other Baltic peoples, Native Americans[36] and Vikings.[37] Mittens are a common sight on ski slopes, as they not only provide extra warmth but extra protection from injury.[38]

Several European standards relate to gloves. These include: 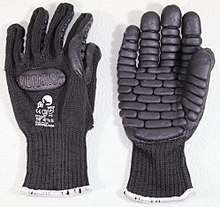 GET YOUR GLOVES TODAY